Hydrogen peroxide (H2O2) is an extremely strong oxidizer used in a variety of applications including sterilization and disinfection, odor control, oxygenation, and cyanide oxidation. Following are several examples of hydrogen peroxide applications where Rheotherm Flow Meters and Flow Switches are used:

Hydrogen peroxide is frequently used in wastewater collection systems to remove hydrogen sulfide that destroys concrete pipes and manhole structures and is commonly used to remove pollutants from waste water and from air. In the United States, hydrogen peroxide is used more and more frequently to treat individual water supplies. It is used to prevent the formation of colors, tastes, corrosion and scaling by pollution degradation (iron, manganese, sulfates) and micro-organism degradation. Several companies and municipalities are using Rheotherm Model 210 Flow Meters to accurately measure the flow of hydrogen peroxide at flow rates as low as a few milliliters per minute.

The unique properties of hydrogen peroxide make it a good technology for keeping cooling loops, process water loops and heat exchangers clean from fouling that can occur due to various contaminants in the water. Hydrogen peroxide works well in removing organic fouling on surfaces through mechanical means and in specific applications through biocidal mechanisms.

Hydrogen peroxide is a highly microbiologically safe reagent. Therefore, it is used as a sterilizing agent for the internal aseptic zones of the manufacturing machines and the surface of the packaging material that will be in contact with the food. Several machine manufacturers use Rheotherm Flow Meters for the injection and metering of hydrogen peroxide in the disinfection of single-serve packaging.

In the food processing industry, hydrogen peroxide is the most commonly used bleaching agent where it finds its use as a peroxygen reagent. Natural oils, natural sugars, waxes, starch, and gums are some of the compounds bleached using peroxides. 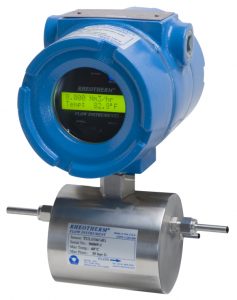 One typical configuration used for these applications is a Model 210-IDT-TU1/4(SS)-4/20-24V (pictured here). The features of this instrument include: local display readout, 4-20mA analog output, stainless steel wetted material and stainless steel sensor housing which provide excellent service in these types of applications.

For more information on the Rheotherm Model 210 Flow Meter for your hydrogen peroxide application, use the form on this page to reach us or go to the Low Flow Liquid Meters page for details and to get a quotation.